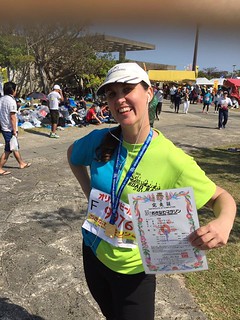 Finally I am an ex-marathon runner!

On the 19th February in Okinawa, I finally reached my goal after running for 4 hours and 49 minutes on a beautiful sunny 19º C day.

I didn’t realise how nervous I was going to be.  I was really worried that I wasn’t going to be able to finish after banging on about this attempt to anyone who would listen since I’d decided to do this back in July of 2016.  I was especially concerned that I wouldn’t finish, not because I was unprepared for it physically, but because I’d overlooked some key step in the organisation and would therefore look like a total twat.  For example, I wasn’t even sure I had successfully entered the race I’d been telling everyone I was running until just a few days before I left for Okinawa when my race package finally arrived in the mail. 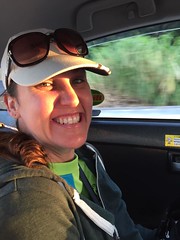 A nervous taxi ride in but we made it in plenty of time as planned.

The morning of the race, I noticed loads of people (well, two couples) leave the hotel at about 6 am for the race.  I’d organised the taxi for 7:30 am thinking this was going to get me there in plenty of time.  Why were they leaving so early?  What did they know that I didn’t?  This made me worry.

Another concern was the weather.  It was 10 ºC warmer in Okinawa than what I had been training in for the last few months in Yokohama.  My support crew (Okinawa) had canvassed my chief running advisor and he had told her to make sure I drank three bottles of water the day before.  It’s a good thing I’m a bit of a camel because I stored all that liquid up nicely and in the end, I was well hydrated for the race but I wasn’t sure how I was going to cope with the extra sweat and salt loss.

Lastly, I woke up that morning to discover that my period had started.  How’s that for timing!  I only had one super soaker tampon with me, I got another from my support crew (Okinawa) but I was worried with all the bouncing up and down, that might not be enough.  I took two paracetamol with a codeine kicker before the race to combat the oncoming period pain and carried another two with me to take around the 10 km mark when my sciatica typically started to flare up in training.  This was not a good sign and all added up to increase my anxiety. 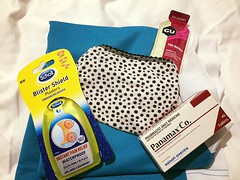 Package carried by my support crew (Okinawa). Everything I could possibly need at the finish line!

In the end, it turned out I needn’t have worried so much.  I was able to finish the race which was the goal I told everyone and I did it in under 5 hours which was my real goal that I kept private.  Not only did I finish under my real goal time, but I did so without vomiting from heat exhaustion or needing to change my pants at the end of the race.  That is success!  And just to prove it, my boss handed me my clean, unused, safety pants, framed, and in front of the staff, as a momento of my achievement on my return to work!

As the training runs got longer and longer, I started getting more and more bored of running around Yokohama.  This is when I started to run to somewhere.

First milestone was running to Kamakura!  This involved running up a big hill with no room for pedestrians.  I got honked at a bit, but the traffic was moving so slowly, I was never in danger.  And it meant that the run finished with a long down hill to help with  my time!

I ran to Shibuya and I did this by following the directions from Google maps without question.  This did take me across the Yokohama Bay Bridge which has no pedestrian access but that was the way Google told me to go and who am I to argue!  The policeman who stopped me on the other side of the bridge wasn’t happy with me but by that time I was already across and what a view I got!

For my final long training run, I went the opposite direction.  I caught the train to the end of the Keikyu line and then ran back home!

Pitfalls along the way 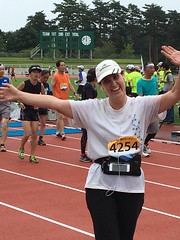 It would have been less painful to walk home from Mt Fuji!

It wasn’t all smiles and smooth sailing though.  After completing my first half-marathon since Miura in 2014, I developed a very uncomfortable case of sciatica.  The car trip back from the race was agony.  Sitting down for longer than 10 minutes became a problem but I did my usual trick of assuming the problem would go away by itself.  Five months later, I went to Tokyo Physio in desperation.  Sciatica was diagnosed and the great team there gave me exercises and stretches and a torturous weekly massage that got me on the road to recovery.

For a while I had difficulty making it past the 25 km mark.  On my first attempt to do 30 km I failed miserably.  I was already tired by the time I had run 24 km but it then started pelting down with rain.  By 26 km, I was drenched to the skin and my iPhone had drowned.  At the 26.5 km mark, I gave up completely and began walking.  I even considered not finishing and just heading for the train but I knew my chief running advisor was waiting for me at the finish line with all my  money. 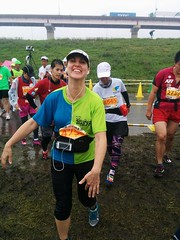 My first attempt at running to Kamakura was also a total failure.  I got lost, my sciatica caused me to give up around Ofuna station but worst of all, I had a bit of an accident in my pants.  It was after this that I started to take the paracetamol with the codeine kicker before a long run.  It was dual action as both an analgesic and (thanks to the codeine) a bottom blocker!

My second attempt to run to Kamakura was ultimately successful however it did start to rain about half way into the run.  It was just a light drizzle so I thought it would be ok.  Typically, I hadn’t bothered to check the weather before leaving my home, and as it turned out the rain set in and once again, I was drenched to the skin by the end of the run.  This time however, I ducked into a convenience store and got a plastic bag for my iPhone (which ultimately saved me another ¥30 000+ repair) and I was extremely lucky that I have good friends in Kamakura who were willing to come to my rescue with a clean, dry tracksuit for the trip home.

People keep asking me now what my next goal is.  It is simple.  I need to shift my marathon muffin top.

I think I’m the only person to actually gain weight whilst training for a marathon.  Despite clocking up 60+ km a week running, I managed to gain 5 kg since last July.  I’m living proof that you can easily overeat your exercise.  My mindset at the time was that I could eat anything I wanted.  I stopped my 2 day a week fasting routine and you had to be bloody quick to beat me to the free cake in the staff room.

Now I’m back on my 5-2 fasting routine, I’ve cut the alcohol right down again, I’m allowing other people to eat the snacks in the staff room (although last week I was spotted licking the crumbs off the table) and I’m still trying to run three times a week to keep up my fitness. 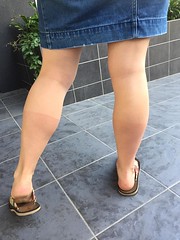 I’m ashamed to call myself an Australian!

Finally I have a lot of people to thank who helped me along the way.  I really couldn’t have done this without you!  In no particular order they are:

Support team (The rest of the world)

Elaine Yandeau
All my colleagues @ YIS
Amanda Roberts
Mum
And everyone who commented and encouraged me on the FaceBook, the RunKeeper, this blog or talked to me in person.  You know who you are!