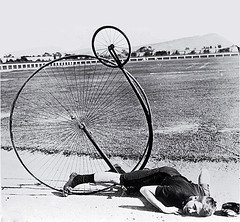 I forgot to charge the battery of my electric bike last night.  This resulted in an accident on the way to school this morning as I was riding up a very steep hill.   As I compensated for the lack of battery power by shifting down gears, the bike slowed down so much, it tipped over!

This hurt me physically but that was nothing compared to the emotional hurt I was about to experience as I laid there on the side of the road.

First, a car went by me.  It slowed down to avoid me but didn’t stop.  I didn’t think too much of it as it is a narrow road and I reasoned that may be there wasn’t enough room for the car to pull over which explained why they kept going.

But then a number of people, all by themselves, walked by me too.

Were they worried that if they asked me if I needed help that I wouldn’t understand the Japanese?  This is definitely not the case.  My Japanese may consist solely of sushi ordering vocab and taxi instructions but lying there, prostrate, bleeding and in not an insignificant amount of pain, you could of asked me in Swahili if I was ok and it would have been clear to me.  You could have used one of the rarer Inuit languages to ask if I needed help and I would have understood you like it was my mother tongue!

Come on people!  When you stumble across a woman on her arse under a bike, help her up.  The bike is heavy and her day has not begun the way she planned.  Don’t ignore her and make it worse.  Lift the bike off her!