I’ve been in Japan for four years now and when I arrived, I avoided the onsen 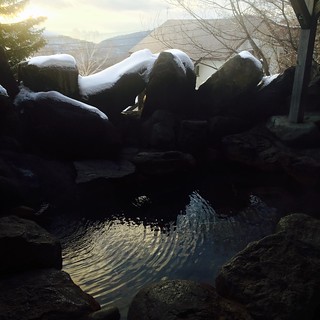 The onsen at our hotel in Shigakogen which I enjoyed with Alyson!

and public bathing culture to the point of preferring to go unwashed for several days if I couldn’t get a private shower.  However, Japanese culture has a way of getting under your skin and now I really enjoy getting starkers and sharing bath water with a bunch of other people.  I’ve even done it with people I know!  This doesn’t sound like much to most, but it is huge for me!

Today I had a bit of a set back.  I was alone and getting ready to take a shower at the gym when two other people walked in.  I was immediately embarrassed and took the remainder of my clothes off with a towel around me for modesty.  Not a big deal though, right?  I went and showered thinking that for sure they would have left by the time I got out.  Wrong!

I got so flustered by this that I’m now sitting at home writing this up wearing TWO bras!  I put my old bra back on and then put my clean bra on over top without realising it.  After I finished, I looked down and saw what I had done which made me even more self conscious.  So I pretended like that was what I meant to do, quickly pulled my t-shirt on over top and got the hell out of there.