Note to self – when in a foreign country, look up a map before going on a forty minute run!

Today I headed out thinking for my run that I’ll just keep the sea to the right for twenty minutes and then keep it to my left for the next twenty minutes.  So I started off running along the sea wall.  I don’t like looking at my phone all the time so I decided to judge the time by counting the number of songs that had played.  I estimated that each song was roughly three minutes long so I decided to run for seven songs along the wall.  It was a bit slow going along the wall and so I thought I should go a bit longer than half way and when it came time to turn back, run along the road a bit faster.

After seven songs, I came a long a gravel track heading back to the road so I took it.  It didn’t lead back to the road.  I went up a hill, down a hill, along a bit, around a corner and two kilometres later, finally hit the road and the way back to Seasalter.  I had only run along the road for a few minutes when my phone told me my forty minutes was up.  I thought about keeping on going but I was really tired.  I had walked into Whitstable and back earlier in the day.

I checked the route on my phone and I was about five kilometres away from my starting point!  I began walking along the narrow road and I decided to hitch a ride back.  I stuck my thumb out but car after car passed me by.  I’ve hitchhiked in New Zealand, the US and even Botswana before and I never had trouble getting a lift in those places.  Did I look particularly threatening in my running gear?  Lots of bikes passed me by too but they were the flimsy racing type and there was no way I was scoring a dink on those!

In the end I had to resort to putting on a limp to get a lift and finally a nice lady stopped to pick me up.  She drove me back to Smuggler’s Cove.  As I alighted from her car, some of the cyclists that had overtaken me earlier went passed.  They yelled out at me that I had cheated.  I agreed with them! 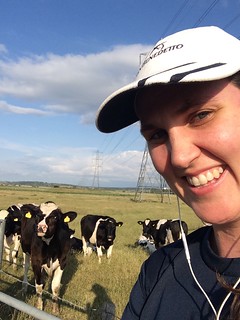 At least I had time to snap a few selfies!

3 comments on “The Importance of Planning”